​A year ago today, I was at LAX, boarding a plane to Switzerland to start my amazing eight-month study abroad experience.  I know this is going to sound cliché, but this was the most life-changing experience I’ve had thus far. I definitely think people should take the opportunity to do so, and so here are ten reasons to study abroad.

Making Memories that will Last a Lifetime

Maybe this entire post is just going to be filled with cliché sayings, but, if you choose to travel abroad, you will make amazing memories.  Who would’ve guessed that I would’ve watched the sunrise in the Sahara Desert while riding a camel?  Or that I would’ve walked across the entire country of Liechenstein?  Studying abroad puts you in situations you could’ve never had the opportunity to experience otherwise.

In all honesty, I’m not even close to being fluent in French, which is what everyone expects after you’ve spent the past eight months in the French-speaking part of Switzerland.  Swiss people can speak fantastic English, so when they realize that you are more comfortable with English than French, they switch over.  Despite my attempts to continue with French, they usually continued on in English, making it a weird situation where neither of us was speaking our native language.  While I didn’t become fluent, I can say that my French skills improved quite a lot – especially since I spoke almost no French before leaving.  So, bottom line, studying abroad does improve your language skills, but you probably won’t become fluent.

While I was studying abroad in Switzerland, the 2016 U.S. presidential was taking place.  Everyone around me was talking about it, and honestly I was kind of surprised.  Students from Switzerland, Spain, and Japan would put in their opinion on the election, because, in all honesty, the new president of the United States would affect the politics of the world.  Because of this, I became more aware of how the decisions of the United States would affect other countries, and, also, how the citizens of other countries came to view Americans because of the election.

In addition, I became aware of the French election that occurred just a few months later.  I can honestly say that, before I studied abroad, I could not tell you a single president of France, but while I was there, I would stay updated (somehow) on the tight race between Emmanuel Macron and Marine Le Pen.  Because of this small change, I felt more like a global citizen. 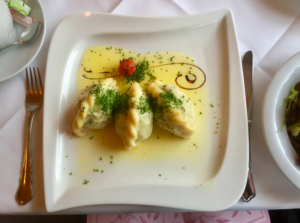 I love food.  When I go to a new restaurant, I will try the weirdest thing on the menu, and, while I was abroad that could be pretty weird.  Ever heard of kärntner kasnudeln?  Nope?  Neither had I until I these little herby cheese dumplings were on a plate in front of me in this random little town in Austria. They were fantastic.  Highly recommend.

Studying abroad provides you with opportunities you never thought you would ever be presented with, and, sometimes, these opportunities can be kind of scary.  You have to conquer your fear of heights to climb to the top of the Eiffel Tower.  You have to conquer your fear of drowning to swim in Lake Geneva.  Studying abroad pushes you to come eye to eye with some of your fears, and, hopefully, help you conquer them.

Struggling to find your way in a country and a culture different from your own really helps you to bond with those around you.  Together we figured out where to buy groceries and how to navigate the train system.  Together we helped each other through some of the hardest situations we had ever encountered, and, because of that, the friends I made abroad are friends that I genuinely expect to have for the rest of my life.

Seeing What You Learn About in Class in Real Life

Ok, I’m just going to say it, I am not a fan of history or humanities classes.  At all.  They are painful.  Like when is this random impressionist painting going to be relevant to my life?  And when people respond to that saying, “when you are at a high-class party with people who love to talk about impressionist paintings,” I turn and glare at them.  Like when will that situation ever occur?

However, when you’re abroad, these classes become slightly more tolerable, because you can actually go see some of the works that you talk about in class.  For example, in one of my humanities classes, I learned about the statue of Nike that is displayed at the Louvre.  When I visited the Louvre in Paris while I was abroad, the information I learned in class seemed slightly more relevant.  Plus, then you feel good about yourself for retaining something in that hour and a half lecture. 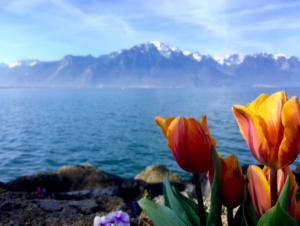 After Hawaii, where I was born and raised, I now consider Switzerland to be my second home.  Even though I was only there for eight months, I experienced so much and made so many memories.  It became the place I wanted to go back to after every crazy weekend trip.  It truly became my second home.

Planning for the Future

Becoming Forever Filled with the Spirit of Adventure

After coming home from abroad, I couldn’t just sit in my house and watch Netflix all day.  That wasn’t me anymore.  I needed to go out an explore.  I needed to see something that I had never seen before or do something that I had never done before.  So I went out and explored my home.  I found cool hikes, breathtaking waterfalls, delicious restaurants, and relaxing beaches.  If I had just decided to stay home and rewatch all nine seasons of How I Met Your Mother, I never would have seen any of these amazing sights.

Four months after returning to the states, the spirit of adventure and wanderlust is still in me. I still want to find new places to go, and, you know, I don’t think this will ever subside.

So, moral of the story, study abroad.