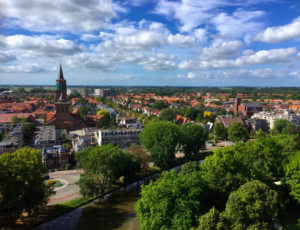 Usually when people think of travelling around the world, they think of travelling to major cities: London, Paris, Tokyo, New York. And I’m not going to lie, that’s where I usually go too. But while those cities have amazing qualities of their own, many times the pure culture of an area is found off the beaten path.  When I took a trip to Amsterdam, I took a day trip to a small town called Leeuwarden to visit some friends that lived there. I wasn’t really sure what to expect, but it turned out to be amazing.

After taking a direct two-hour train from Amsterdam to the end of the track, we ended up in Leeuwarden.  After meeting up with our friends, we headed out to explore the city.

We started by eating HUGE pancakes (mine even came with cinnamon ice cream!) on a boat that just stayed docked on the side of a canal, instead of sailing around at set times.  That way, guests could come on and off whenever they felt like having a giant pancake.

Then, we stumbled across a leaning tower called Oldehove, which is kind of a landmark of Leeuwarden.  We ended up climbing up to the top, which was a struggle. Honestly, I think this building is more tilted than the leaning tower of Pisa!  The slanted stairs were definitely worth the amazing view of the city that we got to see at the end (as pictured at the top of the post).

After wandering through a beautiful local park, we went to a restaurant for a couple hours and just relaxed – definitely my favorite part of the day.  We sat on a little picnic table on a bridge over a canal, ordered some drinks, tried some local foods, watched a procession of local Orthodox deacons through the streets, and just talked.  We caught up on what was happening in each other’s lives while eating some bitterballen (a rice-and-meat ball) and kibbeling (bite-size pieces of fried fish), and drinking some blueberry soda. 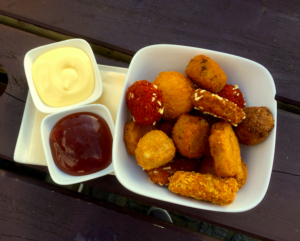 The city wasn’t hustling and bustling with thousands of people.  We were probably the only tourists in the city that day.  There was no set agenda of MUST SEEs and MUST DOs.  Instead, we could just wander and see what adventures awaited us.