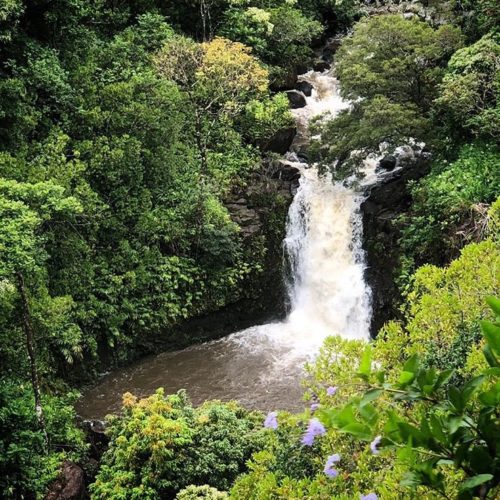 Oahu vs. Maui: The Vibes

Oahu and Maui both have distinct vibes or atmospheres. While Maui is more of a relaxing romantic getaway for couples, Oahu, on the whole, is more of a city for families and budget travelers.

What’s a little difficult about explaining the vibes of Oahu vs. Maui is the fact that there are different vibes depending on where you are on each island. While yes, Oahu has towering buildings in Honolulu and Waikiki, if you happen to be staying on the quieter parts of the North Shore like Laie, Kahuku, and Hauula, any essence of city life fades away. And the couples who choose to visit Oahu instead of Maui often end up staying in the dreamy ocean-front town of Kailua.

The same concept applies to the different parts of Maui, although the changes are not as drastic on Oahu. While Hana (of the famous road to Hana) is a quaint sleepy town, Lahaina and Wailea are filled with tourists and families. And Kahului and Kihei, as some of the largest towns on the island, are quite a stark change from the smaller lesser known Maui towns.

Oahu vs. Maui: The Accessibility and Transportation

Most flights to Hawaii fly into the Honolulu International Airport on Oahu. While there are a few flights that fly directly into Kahului from the U.S. mainland, they are quite rare. So if you’re headed to Maui, you’ll most likely end up in the Oahu airport during your layover anyways. That also means that your flights to Maui will also likely be more expensive than ones to Oahu.

Public transportation on Oahu is better than on Maui. The Bus (yes, that’s what we call our public bus system) on Oahu can get you just about anywhere on the island for just $5.50 per day for adults. While there is a bus system on Maui, it’s not nearly as extensive as the one on Oahu. In other words, while you could get by just using The Bus on Oahu, you couldn’t do that on Maui.

However, if you choose to rent a car, you should know that Oahu’s traffic is horrendous. It’s been compared to the traffic in Los Angeles on multiple occasions, and, as someone who’s experienced the traffic in both places, I can undoubtedly say that Oahu’s traffic is worse. Basically, try to avoid going on H-1 (one of our highways) going West at 5 p.m. (For those of you thinking about staying in Ko Olina, that tip is for you.)

Maui, on the other hand, has significantly fewer people. While Oahu is estimated to have nearly one million people, Maui has 15% of that! Plus, Maui is a larger island in terms of land size, so those 150,000 people have more space too. Because of that the traffic on Maui is MUCH better than the traffic on Oahu. Do note that if there is a major accident or road closure on Maui, it can cause a lot of traffic on Maui as well. But the traffic there isn’t a daily occurrence like it is on Oahu.

If you’re hoping to get to the smaller, lesser-known Hawaiian Islands of Molokai and Lanai by boat, you can only do this from Maui. While you can fly to these islands from Oahu, it is more cost effective to take a boat from Maui.

There are no boats between Oahu and Maui.

Oahu vs. Maui: The Accommodations

Both Oahu and Maui have their fair share of accommodation options. While the beachfront hotels of Waikiki are the most popular in the state, that doesn’t mean they’re right for you. (Personally, they wouldn’t be my first pick.) But there are many places to stay on Oahu, as this accommodation guide will tell you.

Maui also has some fantastic accommodations, including the extravagant Grand Wailea Maui, A Waldorf Astoria Hotel. There are, of course, other less pricey accommodation options, but finding budget accommodations on Maui is rather difficult.

If you’re trying to find budget-friendly accommodations on either island, Airbnb is the way to go. There are even quite a few cool ones that are budget-friendly, if you want to check them out. Do note that Oahu has significantly more low-cost Airbnbs than Maui does.

Oahu vs. Maui: Things to Do

Honestly, there are so many wonderful things to do on both Oahu and Maui, so you really can’t go wrong. But there are a few differences that can be pointed out.

For the Beach Lover

You’re in Hawaii. Every island is going to have fantastic beaches. Here are some of my favorites on Oahu. (Sorry, I don’t have a list for Maui yet!) So If you simply want to lay out and enjoy the sun, you honestly can’t go wrong.

But if you’re looking for beaches to surf at, Oahu tops Maui for sure. The vast majority of famous surf competitions in Hawaii are held on the North Shore of Oahu, including the Da Hui Backdoor Shootout, the Eddie Aikau Big Wave Invitational, and Billabong Pipe Masters. Coincidentally, Oahu is also home to one of the best beginner surfing beaches in Hawaii as well: Waikiki Beach. While Maui does have its fair share of surf breaks, including Peahi, the biggest surf break on the island, they don’t really compare to the waves on Oahu.

That said, the snorkeling on Maui probably beats out Oahu. Molokini Crater, the Kanaio coast, and Poolenelena Beach are all spectacular places to snorkel on Maui. While Oahu does have Hanauma Bay and a couple of other hidden snorkeling gems, Hanauma Bay often gets very crowded and the other snorkeling spots require a little more experience with the ocean than the average visitor has.

Lastly, if you’re looking for colored sand beaches, Maui is the place to go. While both of Maui’s colored beaches take a while to get to, as they are at the end of the road to Hana, Oahu only has white sand beaches. Honokalani Beach in Waianapapa State Park is a black sand beach on Maui, and Kaihalulu Beach is a red sand beach on Maui. (Do note that it is VERY dangerous and sometimes illegal to visit to Kaihalulu Beach. Be sure to thoroughly do your research before attempting to go.)

For the Nature Lover

Maui probably has Oahu beat on nature activities. I mean, the road to Hana? Iao Valley? The West Maui Mountains? Haleakala? They’re all stunning! Plus, unlike the pockets of nature on Oahu, most of the ones on Maui don’t require a lot of physical activity to see them!

You can still find beautiful, nature-filled hideouts on Oahu, but they take a little more effort to discover. Most are overcrowded like Diamond Head, Waimea Falls, and Manoa Falls. Luckily for you, I’ve outlined many of the perfect nature getaways on Oahu, including the best hikes, the best waterfall hikes, and the best botanical gardens.

For the History Buff

If you’re a Hawaiian history buff, both islands have fantastic attractions for you to see. Maui’s pieces of Hawaiian history focus on the average person. For example, Pioneer Mill Co. tells the story of Hawaii’s relatively recent plantation history. Oahu, on the other hand, showcases the history of Native Hawaiian royalty at places like Iolani Palace and Queen Emma’s Summer Palace.

If you’re an American history buff, Oahu is definitely the island for you. Between Pearl Harbor, the USS Arizona Memorial, and the pillbox hikes used in World War II scattered all over the island, there’s a lot more American history to see on Oahu vs. Maui.

For the Culture Fanatic

There are ways to experience culture on both Oahu and Maui. Personally, my favorite way to become immersed in culture is through festivals.

Both Maui and Oahu have dozens of Japanese obon festivals and Hawaiian hula competitions each year. Maui has a couple Hawaiian culture festivals that are unique to the island, including the East Maui Taro Festival and the Olukai Hoolaulea. Oahu also has its fair share of Hawaiian festivals, including the Lei Day Celebration on
May Day, the King Kamehameha Floral Parade, and the Aloha Festival. On top of that, Oahu has a few festivals to celebrate other niche cultures, including the Korean Festival, the Greek Festival, and Festa Italiana.

If you’re hoping to spend the vast majority of your trip to Hawaii shopping (which wouldn’t be my first pick, because there are so many great things to do!), Oahu is definitely where you should go. Oahu is home to Ala Moana Center, the largest open-air mall in the entire world. You can literally spend days in this one shopping center – and there are a few others on the island that you can check out as well, including the South Shore Market, the Waikele Premium Outlets, the International Market Place, and even a large portion of the town of Haleiwa.

Because Oahu is the only island with a proper city, it is the only one with any sort of nightlife. Most things on the other islands, including Maui, close around 6 or 7 p.m., so, after that, you should be happy to just grab some dinner and watch your favorite show on Netflix.

Oahu vs. Maui: The Food

As an Oahu local, I’m probably biased when I say this, but, in my opinion, Oahu has slightly better food than Maui. Because Oahu has more people, it also simply has more variety. My favorite restaurants on the island are everything from Thai to fusion brunch to fresh seafood.

While Maui also has great food, the restaurants that are worth your time are either found at resorts (which means they are rather pricey), or they are hidden gems that take a lot of searching to find. That said, we’re not going to just have you wondering what the best restaurants on Maui are. Until I finally get around to writing a Maui dining guide here at Borders & Bucket Lists, the lists from Pride of Maui and Conde Nast Traveler are both pretty solid.

What did you think of our comparison of Oahu vs. Maui? Do you agree or disagree? If you’ve been to both islands, let me know what you think in the comments! And are there other topics that you would like me to compare between the two islands? Let me know about those too!

Still deciding which of the two islands you want to visit for your Hawaiian vacation? Pin this post so you can peek back at this informative post later!