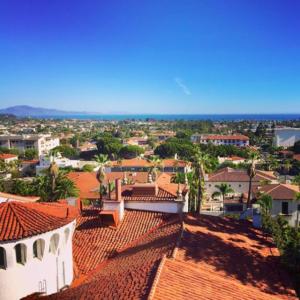 When people think about visiting California, they think about hitting up places like Los Angeles or San Francisco. If they’re going to be a little off the beaten path, maybe they’ll head over to San Diego or Malibu. But there are so many more little hidden gems in California – like Santa Barbara.

This weekend, I spent an entire day in Santa Barbara. Usually I’d just pass it by on a drive from SoCal to The Bay. Maybe I’d make a stop to check out the pier and grab some food, but I’d never dedicated time to spend there. But, this weekend, I found out that there is so much to do there! Being from Hawaii, there are four things that we do when we explore: eat food, go on hikes, chill at the beach, and check out the views. Santa Barbara had all of these, so I was all about it.

The Food in Santa Barbara!

First of all, there is some bomb food in Santa Barbara. There are so many different cultural influences here, you can basically find whatever cuisine you want: Japanese, Ethiopian, Mexican, Italian, Lebanese… The list goes on and on. Just walk along the popular State Street, pop into some shops as you wander, and choose whichever restaurant catches your eye. Like we just picked a random restaurant, which happened to be Carlitos, and the huevos rancheros was amazing. No regrets. We also saw a really long line at an ice cream shop called McConnell’s, so that’s probably worth a trip as well.

The Hikes in Santa Barbara!

While the “hikes” in Santa Barbara are more of walks through greenery, they are still really beautiful. Head over to the Santa Barbara Botanical Gardens, and for $8 to $12, wander around over five miles of hiking trails. Also, you can check out some beautiful views of the Pacific Ocean and the nearby mountains here as well.

The Beach in Santa Barbara!

Butterfly beach is the place to go in Santa Barbara for some chill down time. At sunset, the pinks and oranges that paint the sky look unreal. And the best part is that people here make use of the ocean too, not just the sand! A ton of people are out on the sea in their sailboats, making the most of the free time that they have.

There’s also the Santa Barbara Pier of course. Check out the free aquarium and grab some delicious saltwater taffy before you head out.

The Views in Santa Barbara!

I absolutely loved the town of Santa Barbara. Any other hidden gems in Southern California you think I should check out? Mention them down in the comments, and maybe I’ll head over!