Laniakea Beach, also known as “Turtle Beach,” is the most popular place to see turtles on Oahu – and one of the most consistent too. To get the most out of your time at this sea turtle beach, here is everything you need to know about Laniakea Beach.

*Note: do not get Laniakea Beach (a.k.a. “Turtle Beach”) confused with Turtle Bay. There are rarely turtles at Turtle Bay.

What Should I Know Before Going to Laniakea Beach?

The species of turtle that you will encounter at Laniakea Beach and pretty much throughout all of the Hawaiian Islands is the green sea turtle (locally known as honu). The green sea turtle is actually an endangered species, so please keep that in mind! To help the turtles out, please make sure that you follow these rules:

Do Not Touch the Turtles!

Stay five to ten feet away from them. Because they’re an endangered species, we want to make sure that they have their space at all times. All it’ll take is a slightly stronger current to shove you into them (which we don’t want, because it might hurt the turtles).

Do Not Chase the Turtles!

Do Not Feed the Turtles!

By feeding the turtles foods that would not be part of their typical diet, you could actually hurt their digestive system. Plus, by feeding them, you are training them to get their food from humans, which could become an issue when humans stop feeding them. They will be out of practice when they have to go back to searching for food on their own in the Pacific Ocean.

One final tip! I feel like this one should go without saying, but I’ll be explicit just in case:

Do Not Ride the Turtles!

This might sound kind of absurd, but people have done so. Even our signs telling you to keep your distance tell you to not ride the turtles. How would you like it if you were sat on by a 170-pound human and had to swim to keep yourself afloat? Not a fun time at all.

Bottom line: be nice to the turtles and respect their space bubbles.

Where is Laniakea Beach?

Laniakea Beach is located on the North Shore of Oahu. (It is further east than Haleiwa and further west than Waimea Bay.) There is no legal parking area for Laniakea Beach, but everyone just parks across the street, and it’s fine. No one has ever gotten in trouble for parking there. When crossing the street to reach the beach, wait until there is a large gap in traffic. If there isn’t one, usually a local will stop for you and show you a bit of aloha spirit (a.k.a. local kindness).

How Can I Get to Laniakea Beach?

You can get to Laniakea Beach by car or by bus. Because the parking situation at Laniakea Beach can be a little frantic (you pull into your parking spot straight from the road – there’s no stopping), it may actually be easier to go by bus. (However, that would be assuming you’re only going to Laniakea Beach and not the rest of the amazing places on the North Shore.)

If you do choose to take the bus, you’ll want to get off at the Kamehameha Highway and Papailoa Road stop. From there, it’s just a five-minute walk to the turtle-filled beach. 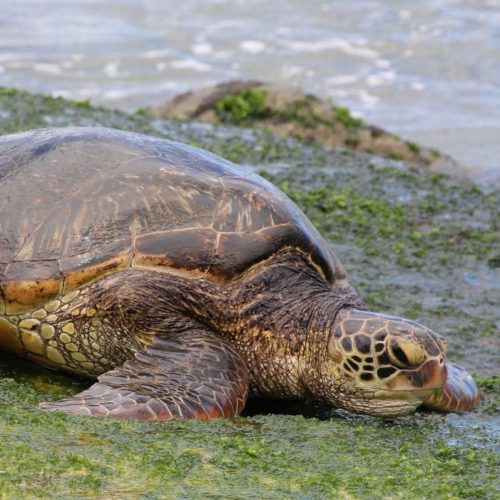 What is the Best Time to Go to Laniakea Beach?

There isn’t a specific “turtle season” as there is a whale season, as turtles don’t migrate like whales do. However, we do know that these honu don’t like to be on shore when there are big waves. That means that during the winter months on Oahu’s North Shore, when the waves are huge, you’ll be less likely to see turtles at Laniakea Beach.

What Can I Do at Laniakea Beach?

As a tip for spotting turtles in the water, it’s easiest to spot them when they get pulled up in a little wave, rather than in the flat portions of the water.

At this Oahu turtle beach in particular, there are always volunteers, who are there both to protect the turtles and to answer your questions. You’ll notice that they’ll put a little rope in front of or around each turtle to indicate how much space you should give the turtle. Plus, if you have any questions, they’ll be happy to answer them!

For example, I’ve heard people ask, “What kind of food do the turtles eat?” They actually eat the green algae that grows on the rocks. So be sure not to step on that when you’re wandering around on the beach! Not only is it slippery, but you’re killing the turtles’ food supply! Sticking to the sand is a very good choice.

Other questions for you to ask are:

“How many turtles come to this beach?”

“Why are there numbers on their shells?”

“When is the best time to spot turtles?”

“Have you ever seen baby turtles or turtle eggs on this beach?”

Or just use your imagination or natural curiosity to come up with more! These volunteers probably have the answer to all of your turtle-related questions.

On the right side of Laniakea Beach, there is a small, rocky area where you can snorkel and try to see a few turtles. In my experience, this is much less successful than spotting turtles on the sand. But if you really want to see turtles swimming in the water, this isn’t a bad place to do that.

To sum it all up, everything you can do at Laniakea Beach has to do with the lovely turtles who come to visit.

Are There Any Hotels Near Laniakea Beach?

In short, no. Laniakea Beach is a rather small beach, and while it does attract many turtles, it’s not really an ideal spot to lay out in the sun or swim for long periods of time. For those reasons (and probably due to the laws preserving the turtles as well), no hotels have decided to break ground near Laniakea Beach. Instead, use Airbnb!

There are a handful of Airbnbs within walking distance of Laniakea Beach. (And, as an extra bonus, a couple of them are actually run by Superhosts!)

Airbnb rental rates range from $220 per night to $1,050 per night, depending on the property.

Need help picking the perfect Airbnb for your needs? Here are a bunch of Airbnb tips for you!

Have you ever been to Laniakea Beach? Or have you seen turtles on other parts of Oahu? Let me know in the comments!

Want to see the Laniakea Beach turtles on your trip to Hawaii? Pin this post for later!