Monday morning, I woke up to a bunch of texts and phone calls from some friends telling me that they were going to hike Manoa Falls that morning.  I’d wanted to go on a hike the entire summer, but it just hadn’t happened.  But that day, it was going to happen. 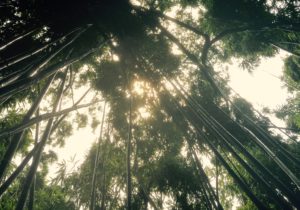 Within a couple hours, we’ve all pulled into the parking lot…just as a drizzle begins to fall.  Now, usually, this wouldn’t bother me, but I’d hiked Manoa Falls before during dry season, and it was still muddy…so what would it be like if it was raining?  Was this a good idea?

But we were determined.  We were going to go on this hike.

We trudged past the sign warning us of the falling rocks from above and the leptospirosis in the streams, as the rain steadily became harder.

At first, we tried to stay out of the mud and the pools of murky rainwater.  We tried to hike under the trees to stay a little drier.  We balanced ourselves on the rocks and hung onto stalks of bamboo. Then we realized there was no way to avoid it, and plunged our sneakers into the brownish puddles of rainwater and turned our faces up towards the pouring sky.

The rain continued to get harder and harder, until not one of us was willing to risk pulling out a phone to take pictures of the amazing views and flourishing greenery.  We even debated turning back.

But we decided to push through it.

And sure enough, it paid off.  The waterfall was HUGE.  It was at least three or four times larger than it was the last time I had seen it.  The force was so strong, it felt as if the waterfall was slapping us in the face.  But it was amazing.

So amazing, that we felt the need to risk our phones and take pictures.  (To the man that thought we were insane for doing so, yes, all of our phones survived, and we got these amazing pictures.) 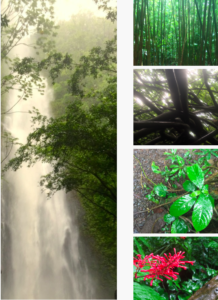